It is the third year already, when autumn brings new inspiration for the construction of a Hisatsu-line inspired model railroad. During all the past months I've done quite a few things for my other project, i.e. the development of our community for those who model in HOe (1:87 on 9mm track). This has been successful, as I'm now slowly building my own module, and a much anticipated model of our very own TU2 Bo-Bo locomotive hit the shelves this summer.
A couple of days ago I've had an inspiration to find out what are the latest developments in T gauge, which we were happy to present at a local exhibition a couple of years ago (someone even posted an autotranslated newsitem on this somewhere on the net, that was fun).
48 hours later, and I'm still online, as it seems. New models, new tracks, new everything!
I was of course glad to find that both left and right switches/turnouts are finally available. Besides, Eishindo has released Kiha-40, which is just the train that still is the main player of the Hisatsu Line in real life (in different modifications, including Kiha-47 that has also been planned for release! I wish they made a 58 and a 147 as well). Combined with as little space as it takes to build a T gauge layout, it may become quite a chance.

Another couple of hours later, and a first version of layout is born. Operation is rather limited, I'll think of it more, but the footprint of only 100x50cm with large portions cut off (actually more like 50x50 + 25x50) is something I could really manage. 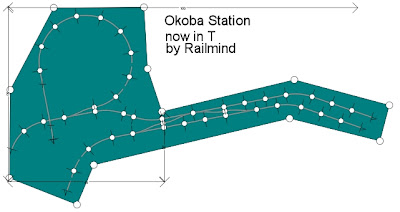