Okoba is the first stop from Hitoyoshi on the Mountain part of the Hisatsu Line, known for its long and numerous tunnels and steep gradients. Because of the gradients often two or three steam engines were required to pull heavy freight trains up (and down) the Yatake Mountain. Therefore all the stations had steam servicing facilities, which at Okoba consisted of a water tower and a service track (according to once source there used to be a locomotive shed).

Okoba is the only station in Japan to have both a full double switchback and a loop. This was necessary to overcome more than 50m (165 feet) elevation in a very limited space, so all the trains had to stop at Okoba.

The station has two stub-ended arrival-departure tracks plus a service track. It has a Meiji-era style wooden station building that is similar to Yatake and Masaki station buildings and that has been restored to its original look at the time the special historic Isaburo-Shinpei tourist train was launced. This is an unmanned station.

Many cherry and plum trees are planted around the station, and the place is widely attended during a plum blossom festival. 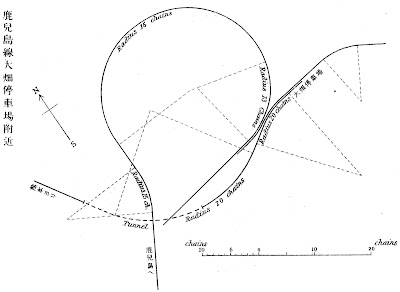 Please click for a full size version. One chain is 66 feet or 20,1 meters, so the station has the smallest radius of 860 feet or 260 m. According to available video footage there is a small tunnel on the upper portion of the loop not shown on this scheme.

The Okoba station is situated at the altitude of 291.4 m. The next station, Yatake, is the highest point on the line, situated at the altitude of 536.9m. Maximum gradient is 33 ‰. Between Okoba and Yatake tourist trains stop for one of the three Japan's Best Railroad Views. Besides, after climbing the loop, the trains stop in a place from where the station can be seen from high above.
Image source: 田邉朔郎 (Sakurō TANABE) (1922). とんねる (Tunnel) (in Japanese), p. 86 f., Figure 115, 東京 (Tokyo): 丸善 (Maruzen) - published on Wikipedia.

The station was built in order to accomodate and service steam locomotives heavily used on the mountain section of Hisatsu Line between Hitoyoshi and Yoshimatsu. Passenger operations were limited as the nearest town was about 1 hour walk away. The line itself was built for strategical reasons, as it allowed the circulation of trains between Kagoshima and Kumamoto prefectures without threats of coastal attack.

Because the track is continuously rising up the slope all the way from Hitoyoshi, the heavy steam engines used (mostly Class D51) required refilling of water and coal, while the engine drivers used a specially constructed fountain to wash away soot. Generally, the station saw heavy daily passenger and freight traffic.

Because of the complex track configuration the construction took a considerable time, and the station was opened on December 26, 1909. During the construction 13 workers died, and there is a monument commemorating their sacrifice near the start of the loop.

On October 17, 1927 an alternative coastal route - the Hisatsu Orange Line - was opened, which contributed to a slow decline of operations on the old Mountain line.

On November 1, 1986 electronic blocking was introduced, and the station was made unmanned.

On April 1, 1987 (JNR privatization) the station was transferred to the JR Kyushu.

When the Kyushu Shinkansen line opened, the passengers nearly stopped using Hitoyoshi-Yoshimatsu Mountain Line, however JR Kyushu launched a compaign for its preservation, which included restauration of the buildings and operating a special Isaburo-Shinpei train which underwent a retro-style interior refurbishment and travels twice a day. This train makes stops at touristic locations, which, together with constant tourist information announcements, makes the journey interesting, comfortable, and relaxing.

Email ThisBlogThis!Share to TwitterShare to FacebookShare to Pinterest
Tags: Okoba